How to manage pricing in times of recession and inflation?

in Monetization and Pricing

Find out the optimal pricing strategy during inflation and recession, when consumers change their behaviors and competition changes prices. 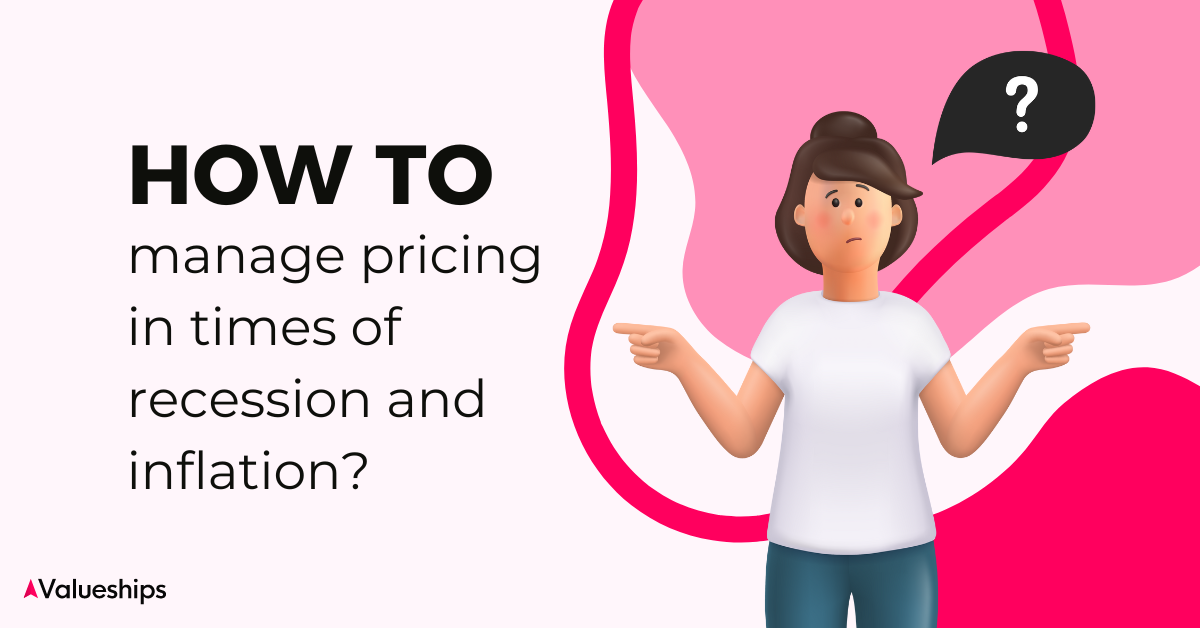 As we are writing this, the average inflation in the US is 8%, the EU average is around 10%, and we are reaching 15% in Poland, and the shadow of recession is slowly but surely approaching Western lands.

If you run SaaS, these two macroeconomic trends mean that your business costs rise by about 1/10 each year, and your revenues... Well, they're likely to start falling hard shortly.

So what should you do about pricing when the economy is fragile, costs rise, and demand falls?

How to manage pricing during the recession?

During the recession, people buy smaller amounts of the same thing, buy the same thing in a cheaper version, or give up a given product or service for good.

In such scenarios, the general pricing trend is to lower prices; companies sacrifice their margin for customer retention. And while in many SaaS cases, it will be a necessity, you don’t have to follow the stream, or at least not too soon.

Your ultimate goal is not to lower prices at all, or at least reduce them as little as possible, as late as possible. And not permanently.

Start with the basics of your pricing

Anytime is a good time to work on the company’s business basics, except when it's too late. The pre-crisis months are the last call to lay a solid pricing foundation. So when you feel the first effects of a recession, go back to the basics of your pricing strategy before lowering any prices and murdering your margins.

We know this may now sound too exciting, but the golden bullet solution to recession doesn’t exist. Instead, a good pricing foundation is what allows companies to walk smoothly through the crisis.

Nail the niche of recession-immune users

Not all of your users will be cutting costs because there are industries resistant to the winds of recession. For example, if you sell a booking system, there is a good chance that no dental clinic will stop using your services because people won’t stop treating their teeth.

Before the recession hits, find a user segment that most likely won’t limit their spending during the crisis. Perhaps this segment accounts for 10% of the number of customers but brings 50% of the total revenue.

If you find this segment, make sure you have the right up-sell and cross-sell offer for it. If you don't, prepare it and use it well when other users leave.

When the market shrinks, many of your competitors will lower prices, and you have to react to it because you will lose part of the market share if you don’t. However, reacting doesn’t mean lowering prices, or at least not permanently. Because when the market starts to break back, you will have to raise them again, and your users won’t like it much.

You don't want to pay off one debt with another one.

What can you do then? Take advantage of temporary discounts, promo codes, and seasonal sales. This way, you will maintain some customers that would likely go away without the discount while not anchoring them lower in terms of your usual, regular price.

How to manage pricing during inflation?

Even if you live in a country with relatively low inflation, your costs still increase by several % year over year, torpedoing your margins. So it might seem that the only two solutions here are either being ok with smaller margins but keeping the users happy OR increasing prices and risking scaring them away.

And what if we told you that you don’t have to take either of the pills?

Of course, increasing prices is a strategy I strongly encourage, but only when the economy grows, and people are willing to spend money. However, raising prices guarantees losing users and their loyalty for most SaaS when inflation is high and people cut off expenses.

Ultimately, you don't want to lower your prices during inflation because you don’t want to lose profitability or anchor users at a lower price after the crisis is gone. And even if you are forced to do so, try the steps below first.

Remain the price, limit the features

In countries affected by inflation, not all products get more expensive; some remain the same price, but their volume decreases. This is a classic food industry strategy you can bring to your SaaS. For example, if one of your plans offers 6 hours a month of consultant's work, maybe you should reduce this package to three hours? If you're delivering 300 GB of bandwidth for $100, try reducing this limit by 30%?

As a rule of thumb, buyers don’t mind a quantity decrease as much as a price increase. But, of course, you should communicate it openly and ensure the reduced scope is still enough for them to use your product effectively. And this can’t happen without good knowledge of your users’ usage and features preference.

Do you offer a feature only available in a package, from which you could separate and sell it individually? Or maybe, based on the available features, you can create an entirely new product or a plan?

This tactic will allow you to reach a new niche on the market and current users more severely affected by the recession, who would churn but now can afford just one key feature. This will allow you to even out the revenue balance caused by the departure of some regular customers without raising prices.

As in the case of temporary recession discounts or promo codes, during inflation, you can take advantage of temporary (or not) fees, such as an additional 0.5% charge on each transaction made by the user.

Generally, people find it easier to digest extra charges than the regular price increase. However, the fee must be big enough to compensate for inflation losses but subtle enough for the user not to churn.

One thing you should remember from this piece is that because competitors raise or decrease prices when the crisis hits, it doesn’t mean you should do it too. It might be that changing prices will be your last resort, but do all in your power to avoid it or at least postpone it until it’s necessary.

To get out of the macroeconomic crisis with a winning hand, you need to take care of your business foundations, including the pricing strategy and understanding your users’ segments and behaviors.

Keep up to date with Valueships posts - sign up for our newsletter and stay informed.