How can The Witcher franchise become one of the top fantasy brands in the world?

Netflix TV series premiered on December 20th and quickly became a massive hit. While critics were not amused, the audience is delighted. 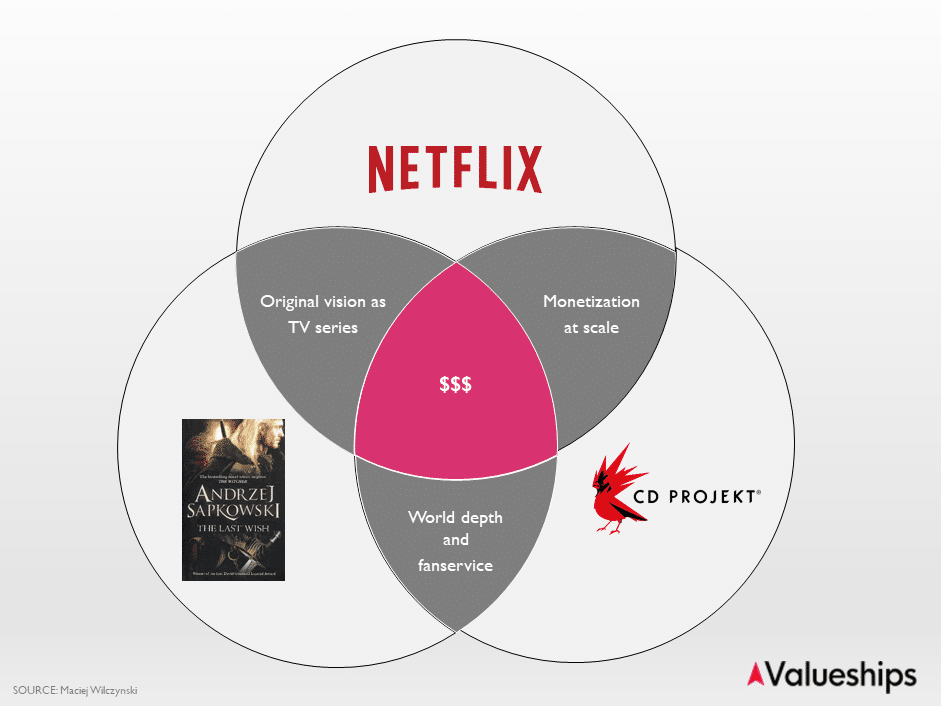 Netflix TV series premiered on December 20th and quickly became a massive hit. While critics were not amused, the audience is delighted. It happened mostly because of previous successes of Andrzej Sapkowski’s books and CD Projekt video games. Together, all three can create superior brand equity. But none of them can do it alone.

Disclaimer: All thoughts here personal, based on subjective analysis and review of Andrzej Sapkowski, CD Projekt and Netflix assets.

EDIT: Long ago, but we have actually predicted and recommended what will happen with the CD Projekt strategy. In fact, on March 30th 2021 CDP moves towards: "ecosystem and franchise building strategy". No problem CD Projekt Red CxO-suite, we will send you the invoice later! Link here

The Witcher is an 8 episodes fantasy series, based on Andrzej Sapkowski’s books. While the original books are great and provided amazing original content, Netflix decided to fund the project mostly because of the outstanding success of the Witcher game series, produced by CD Projekt, a Polish games developer. Series received several titles of “game of the year” and became a hit globally. With hyped, fanatic audience, Netflix ensured they have a critical mass of early adopters, who will love the shows mostly because it exists, rather than its quality.

TV Series plot is based on adventures of three figures: Witcher Geralt, Sorceress Yennefer and Princess Cirilla — all of them are equally important for the storytelling and there is no show without them. Funny thing, in my opinion, exactly three parties are needed for the future success of Witcher franchise.

Andrzej Sapkowski - the man behind the original story

Mr. Sapkowski is a well-known and highly esteemed author, who managed to create a compelling world, full of living figures, schemes and lore. Despite writing the original series in the 1980s, he managed to tackle the world’s most nurturing XXI century problems: racism, ecology, inequality, power and evil part of human nature. His contribution is critical for the franchise in the same way as George R.R. Martin was needed for the “Game of Thrones” success. Without him, the show diverted from its original theme and quality decreased dramatically. He is hired as an “artistic consultant” by Netflix to ensure that TV material doesn’t derive from the original vision of the Author.

There are two problems though. First of all, Andrzej Sapkowski is a pretty old school fantasy world creator. The Witcher series was still more of a high fantasy genre, with typical creatures like elves, dwarves, kings, princesses, and mages. It played well some time ago, defended itself in Lord of The Rings times, but we’re after the “Game Of Thrones” era and we need something more. The world in Netflix series, with Sapkowski’s guidance, was fun but lacked depth, life, and reality of a new world fantasy genre, more allegoric to current state of humanity. It looked more like “Hercules” or “Xena: Warrior Princess” shows, which were not best-in-class. They were nice to watch, but no one will put them on the same shelf as “Game Of Thrones”.

The second problem, Andrzej Sapkowski hates game developer, CD Projekt and had a strong, media-covered beef with them. Some time ago, he accused the game developer of not paying him enough for intellectual property and royalty. While the case has been closed with a quiet agreement, there is a lot of bad blood between the two parties.

While Mr. Sapkowski says that “video games are for stupid people” or they’ve caused “a lot of harm to him”, the truth is that both game series and TV show propelled the sales engine of his books. He was semi-popular abroad before, but being 8/10 top Amazon writers is a totally different story.

The game developer did something outstanding. They considered good source material, enhanced it, flavored it with dark fantasy and Slavic motives, added incredible storytelling to the open world, amazing graphics and created one of the best role-playing games of all time. Obviously, their stock prices skyrocketed, and the company is currently described as one of the biggest achievements of the modern Polish economy.

Fans loved the game and currently, like it or not, associate the brand more with them, rather than books. However, Andrzej Sapkowski didn’t really like the divergence from the original series and felt betrayed. It was all about fame and money.

CD Projekt, wasn’t highly affected by the conflict with Sapkowski and quickly moved forward. They have bought rights to “Cyberpunk” and aimed to leave the Witcher world behind.

However, pecunia non olet and company decided to produce two additional expansion packs, which again, were a massive success. On top of that, they’ve released both offline and online card and board games, figurines, gadgets, limited editions, etc. which proved they really know how to monetize the brand.

CD Projekt is also known as being very honest with the fans, providing great value for money, not ripping them on addons and DLCs and achieved high esteem within the video games fans community. It’s an asset you can’t buy.

Recently, after the show premiere, company stock prices increased, proving that they are strongly tight to The Witcher success. I totally buy diversification of portfolio and need to be more than “company of one game”, but the relationship is visible to the naked eye.

Netflix — the giant who may take it to the higher level

When “Game of Thrones” ended, Netflix needed something strong to fill the niche. HBO wants to release spin-off to GOT: “House of the Dragon”; Amazon tries to push its “Lord of the Rings” show, alongside with “The Wheel of Time”; Disney released “Mandalorian” and Baby Yoda became most bought toy in 2019. Competition to fill the gap after the most popular show ever is fierce — Netflix needed something good.

Luckily, CD Projekt already ripped its benefits from the game, creating an initial audience, which enabled a snowball effect for the streaming platform. After partnering with Andrzej Sapkowski and Tomasz Baginski, visual effects author for the games, Netflix decided to launch the TV series based entirely on books.

TV series was okay; Henry Cavill (inspired by the character of the main protagonist in games and books) played well, but the show lacks depth and leitmotiv of its game predecessor. Netflix doesn’t have the ability to monetize the value beyond the TV show, e.g. in the same way as Disney does it amazingly with toys and gadgets (Star Wars franchise, again). In the end, show received mix opinions but still managed to beat the competition, proving that real value lies ahead.

The current Netflix content strategy is “high volume, low quality”, which won’t work if you’re trying to establish a long-run fantasy brand and Netflix probably already knows it when it comes to “The Witcher”.

The partnership of three parties is needed

Three heroes in the show need to partner to face destiny. I see the pattern for Sapkowski, Netflix and CD Projekt.

Sapkowski provides knowledge of lore, character ambitions and origins behind everything; he also became a very popular Author, being one of the top Amazon writers. It wouldn’t happen without games and TV series.

CD Projekt knows how to cash the Witcher brand properly; after all, they’ve earned $250 million USD only for the third part of the game. It wouldn’t happen without Sapkowski’s core material. Recently their stock prices increased as well — all because of Netflix show popularity.

Netflix owns a mass audience of 160 million subscribers and Witcher TV series proved it works as nearly 127 million people demanded to watch it online. It wouldn’t be the most popular show in the US without games and books.

To cash it properly, the brand needs synergy and a clear, consistent ecosystem. It happened with “Lord of the Rings”, “Harry Potter”, “Game of Thrones” and yes, with “Star Wars” after Disney acquisition. Netflix needs to partner with CD Projekt to get their ideas for world-building, storytelling and to darken the show properly. To increase brand value in the long run, they need new marketing vehicles: video, card, board, and battle games, toys, gadgets, and Baby Yoda- like figures. To do it properly, they need Sapkowski’s blessing and he needs the popularity of series to get income from the books. Show releases, new games, maybe books need to be aligned with each other to create one stable, well-oiled cash cow machine.

One of the songs from the show, which gained virality, is titled: “Toss a coin to your Witcher”. While it’s fun to see the cash dripping for all unaligned parties, we won’t be seeing it in the long-run. It would be a shame to lose such an opportunity.

Want to get professional insights and skyrocket your growth?

Keep up to date with Valueships posts — sign up for our newsletter and stay informed.