in Monetization and Pricing

How much is the "blue tick" really worth? 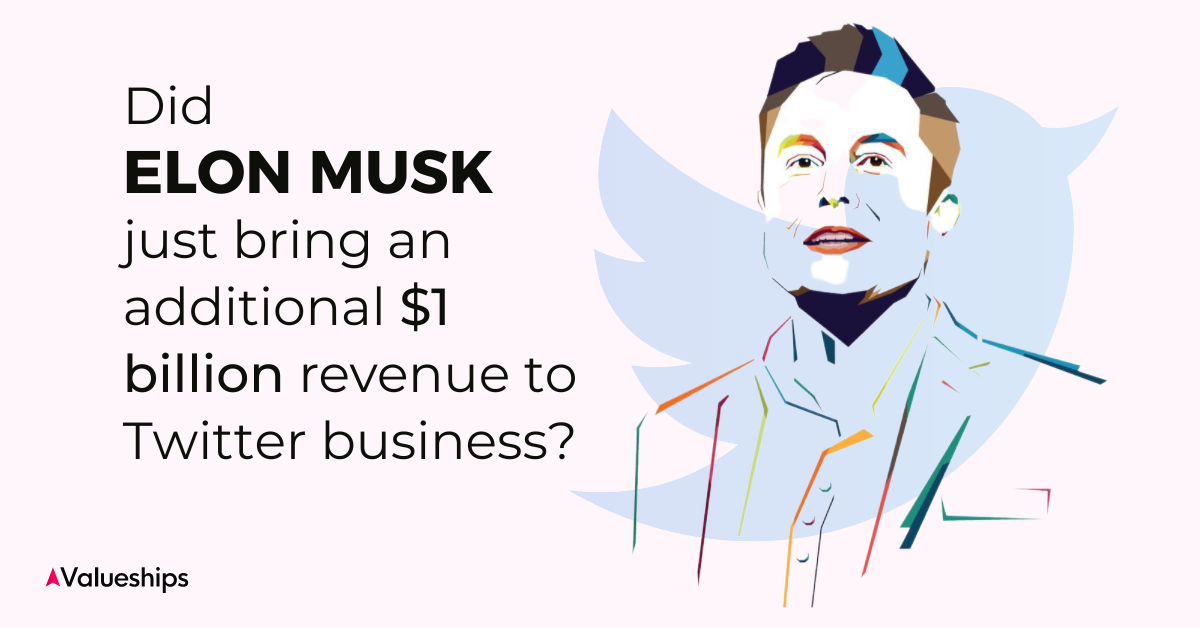 In the last few days, we have observed a highly dynamic leadership takeover at Twitter. Elon Musk, the wealthiest man alive, CEO of Tesla and SpaceX, decided to step in and become the chief executive officer of Twitter. What started as a $44bn acquisition quickly became a debate of free speech and, apparently... a new pricing model for Twitter. Recently, Elon Musk mentioned that the verification in Twitter will cost $8 USD a month. Did he just nail the price in the right way?

In this post, we have done a sanity check, which Elon might have omitted to check how much people are willing-to-pay for the monthly subscription to verify their accounts.

As for now, Twitter's revenue consists of 80-90% of advertising services, with the rest in licensing fees. A premium subscription for $4.99 allows you to edit tweets, but that is pretty much it. As for now, Twitter is monetizing its whole customer base in a highly indirect way. By selling them to others like every other social media company.

What shocked the news was Elon Musk mentioning that the verification status, a "blue tick" mark, will become paid instead of going through a magical black box process done by Twitter's team.

Twitter's blue check and capitalizing on the scarcity effect

Around 300,000. That's how many Twitter accounts are blue-check verified. In 2022, there were 206 million active users on the platform.

It means the blue badge is available for 0.15% of their active base.

Let's assume we will cut off 40% of the entire Twitter base. It still leaves only 0.24% of users with a verified account, which symbolizes status and appraisal.

A blue badge of being a verified account means you are authentic, notable, and active. It's a highly luxurious product. Let's mention that the total circulation of Birkin bags Hermès produces is estimated to be around 200,000.

Elon's bet is to democratize the verification process for everyone and make it simple: if you want to be verified, pay for it and keep paying.

It's an extension of prof. Scott Galloway's idea to monetize the highly active customer base:

"Twitter needs to move from an ad model to a subscription model, with subscription fees for accounts of a certain size. The platform would still be free for the majority of users, but accounts over 200K followers (or even 50K followers) should pay for the audience that Twitter provides them with. This would lead to better financial results because recurring revenue is reliable, profitable, and earns a higher multiple than transaction revenue."

What is the willingness to pay for a blue tick verification on Twitter?

Elon got into a discussion with Stephen King about how much the subscription should cost. Musk negotiated the price point from $20 to $8.

Even though only on Twitter you can find a multibillionaire negotiating a subscription price with an accomplished author who sold $500mn in books, it quickly became an excellent topic picked up by major news websites.

However, before it went viral, we did our little survey research in the United States, and the results were outstanding. We have asked 200 people who use Twitter daily about their willingness to pay.

According to our Price Sensitivity Meter survey, he nailed an optimal price at $8.33 with ~$10.77 at a maximum threshold. Considering statistical confidence factor, he guessed it like a pro. Or maybe he didn't and actually do the right research?

The Van Westendorp question asks responders what prices they see the deal as too cheap, cheap, expensive, and too expensive. It's the renowned and highly recognizable method we use to work with our clients daily.

If you look closely at the green and purple lines, it's our optimal price point. About 20-25% of our responders are willing-to-pay for the subscription revenue.

We have also asked an extended question on the likelihood of purchase. According to the research, 55-60% of responders would purchase the subscription within the next six months.

Let's take our numbers conservatively and play with them. Our research is not representative of either the US or worldwide sample. However, we can use it to show that Elon Musk might have a point. Let's do the math quickly.

If 20-25% of the United States Twitter user base (77 million) can pay for it, and 50-60% will make it within six months, we can expect Twitter to ramp up its top-line to 61.6 million monthly recurring revenue.

It's 14% to 21% in additional top-line revenue, which creates a clear profit for a company and heavily boosts the overall lifetime value of the user. They would lose some of their advertisement business in this segment, but who cares if you directly monetize users?

Keep in mind our numbers match only for the United States. Twitter is a worldwide platform, and the "blue tick" penetration rate might increase in time. If you consider it lower than a $9.99 essential Netflix or Spotify subscription, our team at Valueships believes that, from a pricing perspective, it might work. Also, according to Musk’s tweet, there will be additional features added to the mix, which can boost the willingness to pay substantially.

Do you like what we publish? Please add yourself to our newsletter and stay in touch!

Keep up to date with Valueships posts - sign up for our newsletter and stay informed.